The symmetrical Urban Akali logo consists of five characteristics, each represents an important part of Sikh heritage. In the first lines of the Sikh daily prayer, the Ardaas, Siri Guru Gobind Singh Ji asks to remember the Supreme Being and all the Gurus. In referring to God, the Guru chose to use the unique metaphor of the Kirpan. The logo is an inspiration of a coat of arms such as ‘The Lion and Unicorn’ the Royal Coat of Arms of the United Kingdom which dates back to the year 1603.

Second, the Shield otherwise known as the Dhal. The Dhal was formed in the 16th Century in various sizes, commonly small for vast movements and swift protection. It is used in most indian marshal-arts such as Shastar Vidya and Gatka. The Dhal was originally formed in Persia. In the 16th century, when the Mogal Empire invaded India, the two empires were at war. Weapons such as the Dhal and the Kirpan were collected from fallen warriors, creating Indo-Persian weaponry. The four rivets on the front of the Dhal are to secure and support the straps behind.

The surname Singh was adopted by the Sikhs in 1699 by the 10th Guru Sri Guru Gobind Singh Ji. Guru Gobind Singh Ji Maharaj sought to abolish the caste system that assigned value and rights to individuals based upon there families they were born into. As part of the movement to end caste discrimination and promote equality among all humans, followers of Sikhism were encouraged to adopt common last names, leaving no identifiable differences between individuals from rich or poor backgrounds. Men were instructed to adopt the last name Singh, meaning lion.

The Lion is a spiritual animal, it’s most common traits are majesty, strength, courage, justice and military might.

The fourth illustration evokes the holiest shrine of Sikhs, the Golden Temple dome, ‘Harmandir Sahib’. It was built in the late 16th century by Siri Guru Arjan Dev Ji the 5th Sikh Guru. The Sikh scripture was placed inside the Temple, ‘Gurudwara’ in 1604. Its sanctum walls were covered in marble and the dome was decorated with gold foil by Maharaja Ranjit Singh, the ruler of Punjab in the 19th century.

The fifth feature of the Urban Akali logo is the Gajgah. The Gajgah is adorned at the front of the Dastar ‘the Sikh fortress – Turban’ made from steel, worn by Akali Nihang warriors. It also represents a U.A for Urban Akali.

Urban stands for population or an environment of the future.

The Akali’s are fearless, victorious and eternal warriors of past and present.

Urban Akali is created to educate Sikh heritage through the power of design and the world of fashion. 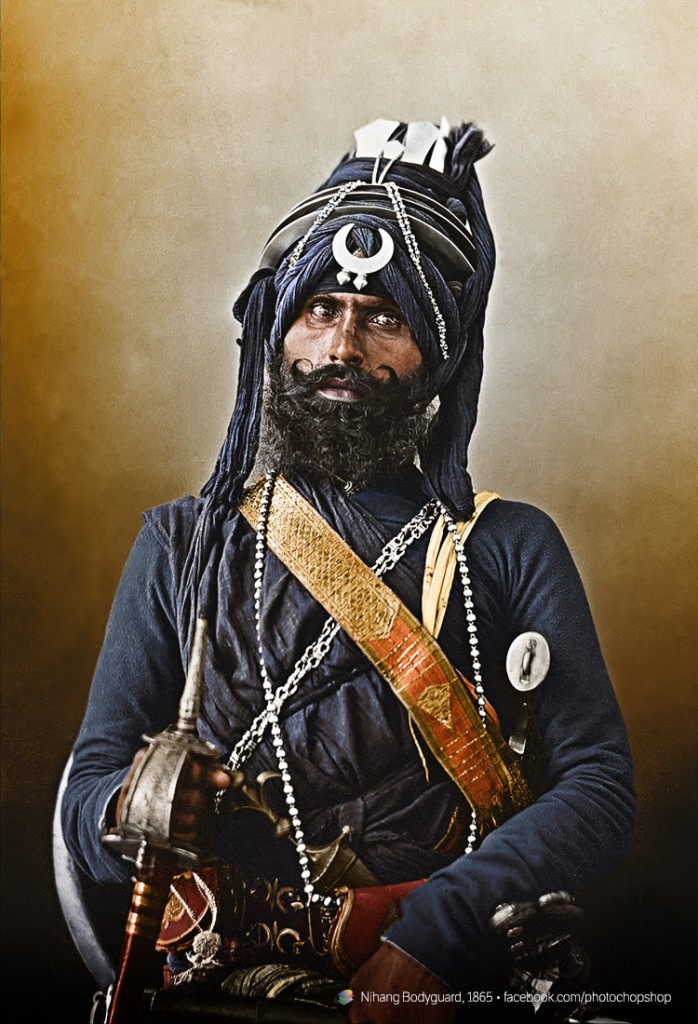 The full attire of an Akali Nihang warrior comprises of navy blue with edged bracelets of iron around their wrists (jangi kara) and quoits of steel (Chakram or Chakar) tiered in their lofty conical turbans, together with the traditional sword (Kirpan) carried by all baptised Sikhs. When fully armed, a Akali Nihang will also bear one or two swords (either the curved Talwar or the straight Khanda) on the right hip, a dagger (Katar or Katara) on the left hip, a buckler made from buffalo-hide (dhala) on the back and a few large Chakram’s around the turban (Dastar). In times of war, arms worn on the person would generally be reserved until the warrior lost the weapon held, often a bow or spear (Kaman / Tir or barsha). Armour consisted of iron chainmail worn under an iron breastplate (Char Aina). The war-shoes (Jangi Mojeh) were constructed of iron at the toe, making their pointed toes capable of inflicting cuts and stab wounds. 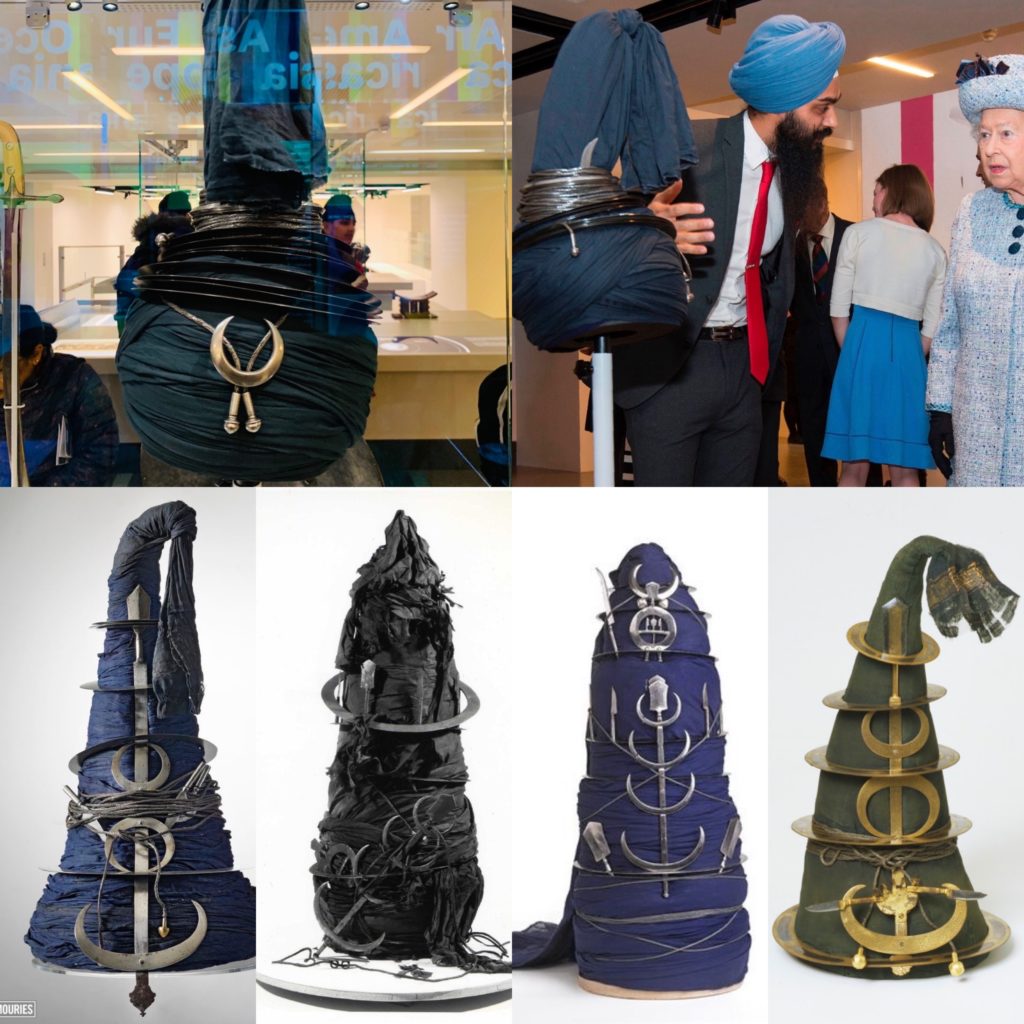 This Sikh fortress turban is a rare object of which only five exist in Britain. This particular one is wrapped around a wooden cone and was made for a ceremonial purpose rather than every day wear. Sikhism is a monotheistic faith founded by Guru Nanak in AD 1469. The key principles of the faith include the belief in a Universal god and the equality of all human beings. The turban has always been integral to Sikh tradition, representing dedication to the faith and providing protection for the uncut hair. The turban is known as a Dastar Boonga or turban fortress, which is a type distinct to the Sikh warrior tradition. Its tall conical structure is very much like a tower or fortress and made it effective in battle, protecting both the hair and head from sword blows. It is tied by entwining the long hair with the turban cloth which can be up to 20 yards long. Ornaments such as steel quoits and small daggers were secured to it by winding long lengths of plaited steel around the turban to provide further protection. The Dastaar Boonga was and continues to be worn by the Akali-Nihangs. Religious persecution under the Mughal Empire (1526-1858) in India led to the development of a Sikh martial tradition. The Akalis (Immortals) were the original Sikh warriors raised by the sixth Sikh Guru (Guru Har Gobind). The Akali often, referred to as Akali-Nihang, is a dedicated believer in Akal, meaning the timeless one (God). The primary function of the Akali army was to defend Sikhism against the then oppressive Mughal Empire. Sikhs were encouraged to live a knowledgeable, wise and spiritual life while engaging in warfare to defend and protect the oppressed. This concept of ‘Saint Soldier’ remains the underlying principle of Sikh warriors. Akal-Nihangs wore dark blue clothes, iron bangles around their wrists and steel quoits in their tall conical blue turbans, together with swords, daggers and tiger claws. Today the Akali Nihangs mostly exist in areas of the Punjab and still observe the original Sikh martial traditions. The ornaments on this turban include a modified Rattray Battalion badge, which suggests it may have associations with the British Army battalion raised in January 1856 by Captain Thomas Rattray. It has been in the British Museum collection since the early twentieth century, and in 1900 was displayed at the Banqueting House, Westminster as part of a ‘Relics of Old Wars’ exhibition. Turbans such as this were collected by generals of the British army in the late nineteenth century as examples of Indian art and culture and would have been specially made for the British market.

Any cookies that may not be particularly necessary for the website to function and is used specifically to collect user personal data via analytics, ads, other embedded contents are termed as non-necessary cookies. It is mandatory to procure user consent prior to running these cookies on your website.